On to Pinter and Nigro

The reading of Nancy Gall-Clayton's The Snowflake Theory in October went extremely well, with readings at the Yassenoff Jewish Community Center in the community and at the university as well; Nancy was able to attend. Veteran performers Lil Strouss, Jared Saltman, and Cheryl Jacobs played the leads, with OSU students Adam Peal and Jessi Biggert in support; more details at www.beyondborschtbelt.blogspot.com

The reading was the centerpiece of Beyond the Borscht Belt: the second Jewish theatre festival in Columbus, produced by the Ohio State University Hillel Foundation Wexner Jewish Student Center, the Ohio State University Department of Theatre, the Jerome Lawrence and Robert E. Lee Theatre Research Institute, with support from the Leventhal Fund and the Lenore Schottenstein Jewish Arts Endowment of the Columbus Jewish Foundation.

In May, we'll celebrate Harold Pinter's life with readings of several of his works, directed by Pinter scholars Dr. Ann Hall and Dr. Katherine Burkman, with a couple of scenes directed by me. That'll be May 17th, in the Roy Bowen Theatre on the OSU campus.

Then later, at a date still to be determined, Don Nigro's new play, "Henry and Ellen," detailing the convoluted history of the artistic and personal interactions of Sir Henry Irving and Ellen Terry. Distinguished performers John Kuhn and Cate Blair-Wilhelm will perform the leads. Watch this space!

Next Up: The Snowflake Theory

pause on various readings for the moment, although we still hope to get Sandra Dempsey's Rosa's Lament done in the next month or so,and Martha Boesing's Song of the Magpie in, we hope, the early fall. Nancy Gall-Clayton's The Snowflake Theory will be given a staged reading in October as part of the second Beyond the Borscht Belt Festival of Jewish Theatre, presented by the OSU Hillel Foundation, the OSU Department of Theatre, the Jerome Lawrence and Robert E. Lee Theatre Research Institute, with support from the Leventhal Fund and the Jewish Community Fund. Details at http://beyondborschtbelt.blogspot.com

An enthusiastic, if a bit small, audience heard Bonnie Rozanski's Still-Life With Dog read on April 19th. A miscalculation (and ignoring of the calendar!) had us doing the reading on both the first night of Passover and after the spring football game, in which the OSU team plays itself to about 90,000 fans. Our reading was late enough so that it wasn't affected, but it did take an hour to drive the playwright, Bonnie Rozanski, and her husband, Rider University President Mordechai Rozanski, three blocks from the freeway to the hotel on campus. 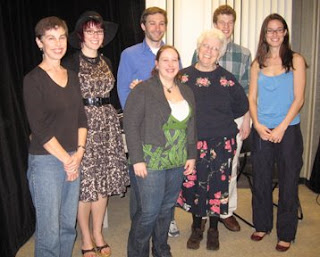 Next up: Sandra Dempsey's Rosa's Lament on the 24th, again in the New Works Lab at Ohio State's Drake Performance and Event Center.

Here's Bonnie Rozanski, on the left, with her cast: Jessi Biggert (Sarah), Dwayne Blackaller (Donald), Doreen Salkiewicz (in front, Fanny), Sarah Worthington (Rachel), Alex Coccia (behind Sarah, Mark), and Virginia Logan (Georgette). Since Raymond Caldwell was unable to be there, Alan Woods wound up reading Marvin, and was unable to take photos of the reading itself.

We learned from Bonnie afterwards that the idea for the play came from her own life experiences growing up. She spoke very positively of the insights the reading gave her, particularly into the character of Donald. She also praised Doreen escpecially, saying Doreen's reading of a long monologue for Fanny that ends Act I was as good as it possibly could be.

Still-Life With Dog up next 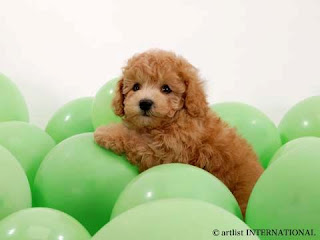 Bonnie Rozanski's Still-Life With Dog, the first runner-up in the full length play category in the 2007 Eileen Heckart Drama for Seniors Competition, will be given a staged reading on Saturday, April 19th, at the New Works Lab in the Drake Performance and Event Center, 1849 Cannon Drive, on the OSU campus. The cast includes both Ohio State graduate and undergraduate actors and performers from the Central Ohio theatre community:

The reading will start at 7:30 p.m. Parking is free in the lot across Cannon Drive, between Lincoln and Morrill Towers. Bonnie Rozanski is flying in from New Jersey for the reading, and will welcome feedback-- 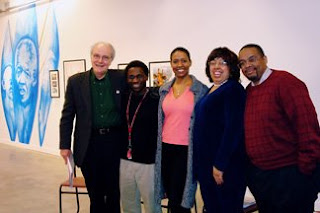 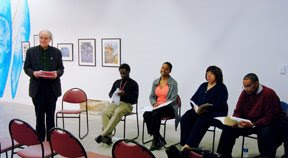 Judy Juanita's Theodicy was given a reading on March 11th in the new Urban Arts Space in downtown Columbus, which currently houses an exhibit called "Midnight Robbers: The Artists of the Notting Hill Carnival," curated by OSU Theatre Professor Lesley Ferris and Adela Ruth Tomasett of Middlesex University (more information at http://theatre.osu.edu/carnival/index.html). The reading was performed by Anita Davis, Patricia Wallace-Winbush, Truman Winbush, and Lloyd Graham; Alan Woods stepped in to read when a fifth actor had a traffic accident and couldn't get to the event.

the cast, joined by Ann Alaia Woods (at the extreme left), who videotaped the reading.

March 11th was chosen for the reading both because of availability of the space, and because it marked the anniversary of the 1959 opening of Lorraine Hansberry's A Raisin in the Sun in New York, the first play by an African-American woman playwright to be produced on Broadway. 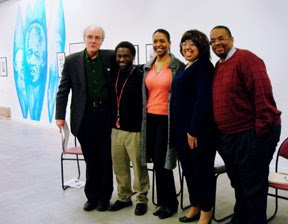 Winning plays from the 2007 Eileen Heckart Drama for Seniors Competition were given readings on February 27th at Ohio State's Department of Theatre New Works Lab, with veteran area actors performing for an appreciative audience. First up was Harriet Weiss's Billie and Henry, winner of the ten minute play category. The play, a charming piece with a twist at the end, is about two aging veterans of the motion picture industry facing retirement and limited resources, and coming up with an ingenious -- if not entirely ethical -- way of coping. Ann Mirels read Billie, while Ira "Bill" Simons was Henry. Ann's been active for decades in local theatre, as has Bill; both have read for us before, on numerous occasions. In a twist that matches the play, neither is actually the appropriate age for their characters--Ann is several decades younger than the mid 80's Billie, while Bill, who celebrated his 83rd birthday just last week, is a decade older than Henry. Here they are together: 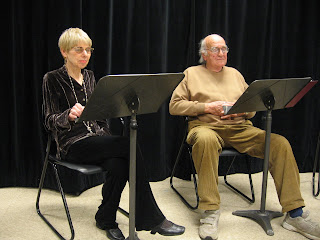 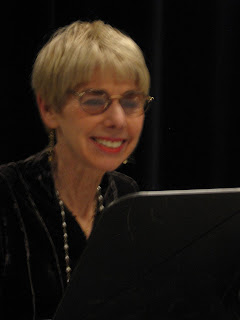 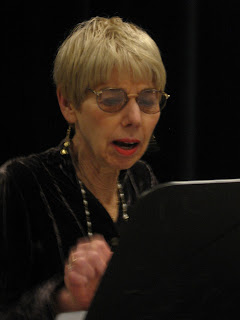 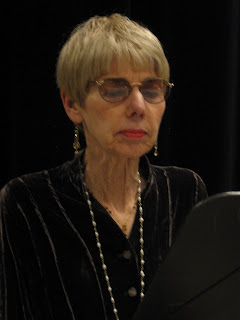 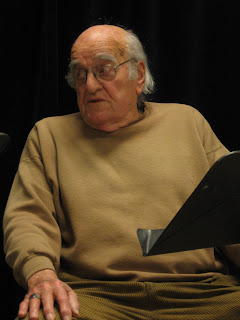 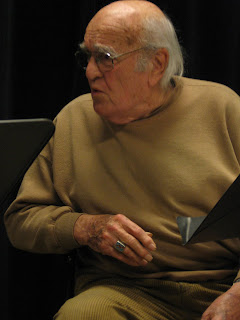 Henry has a plan-- 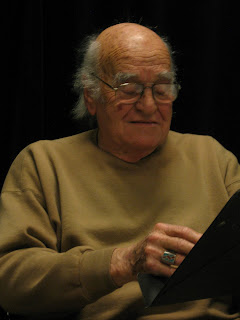 Dori Appel's Bon Voyage treats three sisters, retired teachers Dottie and Lottie, and their younger sister Scotty, as they prepare to go on a cruise. Veteran Columbus performers Sarah Worthington and Linda Dorff were Dottie and Lottie, while recent Ohio State MFA performer Robin Post, who now heads Ohio State's outreach performance group, was Scotty. Sarah has been active in Senior Theatre in Columbus for over twenty years, having founded her own troupe, Footsteps of the Elders. Linda, a member of Actors Equity, has played roles ranging from Madame Armfeld in A Little Night Music to Fonsia in The Gin Game, Ma Joad in Tobacco Road, and a zany singing detective in Something's Afoot, among many, many others. Robin played many leads on Ohio State stages; her troupe currently does role playing and presents performances that dramatize ethical and professional choices for students in the medical and engineering programs (among others) on the Ohio State campus.

Here are the three sisters: from left to right: Sarah Worthington as Dottie, Linda Dorff as Lottie, Robin Post as Scotty 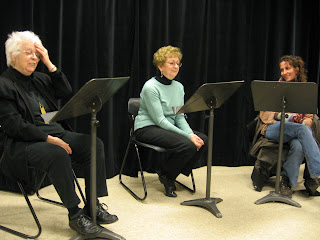 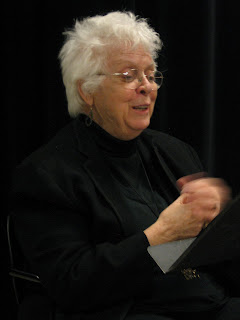 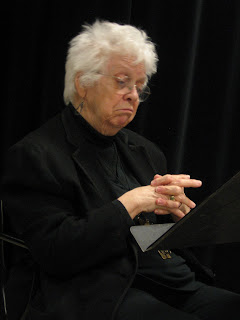 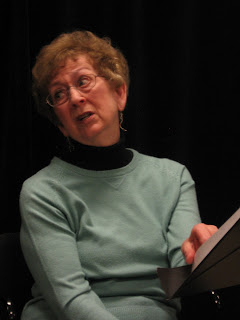 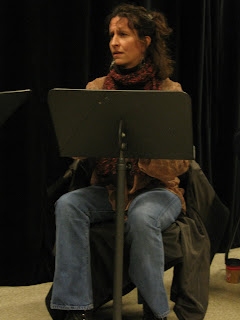 all photos by Ann Alaia Woods

For Unto Us returns!

Response was so positive to the reading of James McLindon's For Unto Us that a repeat reading has been scheduled for Sunday, January 20th, at 3:00 p.m., again in the New Works Lab at Ohio State University's Drake Performance and Event Center. The reading was requested by Dignity, the GLBTQ Catholic group, although all will be welcome. Most of the original actors will be repeating their roles, but since Tory Matsos is already committed that day, Doreen Salkiewicz will be the pregnant young woman disrupting the settled events of the household.

Join us on Sunday, January 20th, New Works Lab, Drake Performance and Event Center, 1840 Cannon Drive on the Ohio State University campus, just south of the Ohio Stadium. Free parking for this event in the lot across the street from the Drake Center, between the twin towers.

James McLindon's FOR UNTO US

For Unto Us by Massachusetts playwright James McLindon, is the winner of this year's Eileen Heckart Drama for Seniors Competition (full length category). It will be given a staged reading on Thursday, November 29th, at Ohio State University's Drake Performance and Event Center, 1849 Cannon Drive, Columbus, Ohio, at 7:30 p.m. in the New Works Lab.

Veteran Columbus actors Ira "Bill" Simons and Robert Monaghan will read two elderly friends, one a blind retired priest, while Joy Reilly, part of the Howling at the Moon ensemble, founder of Grandparents Living Theatre, and my colleague in Ohio State's Theatre and Aging program, reads the non-priest's daughter, a rigidly conservative Catholic. Tory Matsos, who appeared in our reading last year of Emily Mann's Meshuggah!, will read the pregnant daughter/granddaughter, joined by OSU Theatre undergraduate Kyle Jepson as her lesbian partner in this comedy-drama about changes roiling the Catholic Church as the faithful wrestle with parish closings, priestly indiscretions costing millions of dollars in damages, and parishioners defecting from increasingly conservative rulings on social matters from the new, deeply conservative, pope in Rome clearly at odds with many American Catholics' views.

James McLindon will have six plays in production in the coming year; he recently resigned from a law practice in order to devote full time to playwriting.

The winners and finalists from the 2007 Heckart Competition will all be read during the next few months. Following the reading of McLindon's winner play, the schedule is: